Reflections on Tisha B’Av, and the Laws of the Fast when it falls Out on Saturday Night

On Fast days, Torah scholars are especially required to engage in loving concern for others, and avoid denouncing them * When Tisha B’Av falls out on Motzei Shabbat, Seudat Shlishit is eaten as usual, but one must be careful to stop before sunset * Someone who is sick and needs to eat on the Fast should make Havdalah over beer, and if he does not have beer, over coffee * Shoes or sandals that protect the foot from rough terrains should not be worn, even if they are not made of leather

Fast days are intended for teshuva (repentance) and tikun (rectification) in which observant Jews from all religious circles and sectors are obligated, but since Torah students have the highest responsibility, as is written, “And around Him it storms [nisara] mightily” (Psalms 50:3) – our Sages said this teaches us that the Holy One, Blessed be He, is scrupulous with those around Him, i.e., Torah scholars and the righteous, even to the extent of a hairsbreadth [hasa’ara]”, thus, I will address the tikun required for those who study Torah.

In his talks leading up to Tisha B’Av, our teacher and mentor, Rabbi Tzvi Yehuda Kook ztz’l said: “The greatest bitul Torah (abrogation of the Torah) is when one approaches the Torah in the wrong way, when one does not approach it out of purity… reasons that cause the Torah to be hated…there are frightening words of Chazal (our Sages) about… those who cause the Torah to be hated… Chazal said: “And you shall love the Lord your God”, which means that you shall make the name of Heaven beloved” (Yoma 86a). One must make the name of Heaven beloved by people … How many times have I repeated the sacred words of the Gaon of Vilna: ‘But Esau I hated’ – that Hashem Yitbarach hates those who denounce His sons, even the righteous’… Presumably, there is reason to denounce, and the Gaon understood that, nevertheless, he said that Hashem hates those who denounce His sons – even the righteous. For sure, those who engage in it (denouncing) have an side of holiness. Still, they have no excuse, whether they denounce using a lie, or denounce truthfully. Uprooting of the Torah is caused by its abhorrence – this is worst of all” (Sichot HaRav Tzvi Yehuda: Moadim, p. 388).

Our Rabbi would also say: ” “The more of a lamdan (Torah scholar) a Talmid Chacham is, the more appropriately he fits the definition of a Talmid Chacham called ‘Moshe Rabbeinu’ – the more he must be full of ahavat ha’briot“.  Admittedly, there are also “judicial procedures of the ‘Shofet kol Ha’aretz’ (‘Judge of the Whole World’) – there is also a side of anger. Our Sages explain: ‘How much is His anger? A moment’. Over all, however, the vast majority of Hashem’s divine leadership is goodness, kindness, and pleasantness … Our Sages attribute to Balaam the power to concentrate on the depth of evil, the depth of wrath … the evil eye. It is clearly written in Pirkei Avot that whoever possesses a good eye is of the disciples of Abraham, our father. Abraham our father is all sympathy and affection. ‘One that loves God; one that loves humankind’ (Avot 6: 6). Out of ones’ love for the Creator, he loves humankind… (Sichot HaRav Tzvi Yehuda p.14-16).

The “tzadikim” who denounce, always have explanations why the situation is really worse now than ever before and justifies condemnation, such as that the LGBT movement is about to destroy the family and the world; that Reform Jews are worse than all the evil anti-Semites; that the religious, who are really neo-Reformers, are even worse than the Reformers, and the opposing side of the same Hassidut, or yeshiva, is the worst of all. In short, whatever they encounter is always the worst, and most dangerous. When this is done in the name of the Torah, the Torah is uprooted, and Hashem’s name is desecrated. This is what we must repent for on the Fast day, so that we may be privileged to reveal the Torah, which benefits and adds blessing to the nation, and the world.

There is an intermediate time between Shabbat and the fast, during which Shabbat has not yet ended but the prohibitions of the fast have already begun. This happens because we are unsure when one day ends and the next day begins – at sunset or when the stars emerge. Therefore, the period between sunset and the emergence of the stars is ambiguous, being possibly day, and possibly night. It is called “bein hashmashot” (twilight). And since there is a mitzvah to add time onto Shabbat, the holy day continues until a few minutes after the stars emerge. Consequently, the time between sunset and shortly after the emergence of the stars is both Shabbat and Tish’a B’Av. During that time, it is forbidden to do anything that would appear like a custom of mourning, because we do not mourn on the Sabbath. On the other hand, after sunset, we avoid doing anything that is not necessary for the sake of Shabbat, like eating, drinking, washing, and anointing.

Therefore, we eat the third Sabbath meal (seudah shlishit) like we do on any other Shabbat, including the singing of Sabbath songs. However, we stop eating and drinking before sunset, because there is no obligation – from a Shabbat perspective – to continue eating seudah shlishit after sunset (Jerusalem: 19:49; Tel Aviv: 19:47; Haifa: 19:51; Beer Sheva: 19:45).  It is also fitting not to sing joyous songs after sunset, and doing so does not constitute an expression of mourning, for people do not generally sing happy songs every moment of Shabbat  (Peninei Halakha: Zemanim 9: 4).

Bathing During the Intermediate Time

We also refrain from washing and anointing ourselves after sunset; after all, we do not bathe ourselves at all times on Shabbat anyway. However, one who relieves himself during bein hashmashot should wash his hands normally, for if he washes as is required on the fast he is, in effect, mourning on the Sabbath (ibid.).

Change of Clothes and Shoes

We remain in our Sabbath clothing, keep our shoes on, and continue to sit on chairs and greet each other until a few minutes after three, mid-sized stars appear in the sky (approximately 35 minutes after sunset). Then, we say Baruch ha’mavdil bein kodesh le’chol (‘Blessed is He Who separates between the holy and the mundane’), by which we take leave of the Sabbath. Afterwards, we remove our shoes, take off our Sabbath garments, and change into weekday clothes.

When changing clothing, one should wear clothing that was already worn the previous week, because one may not wear freshly laundered clothing on Tish’a B’Av.

Many communities have a custom to delay Ma’ariv until around fifteen minutes after Shabbat ends, in order to give everyone time to take leave of the Sabbath at home, remove their shoes, change their clothes, and come to the synagogue for Ma’ariv and the reading of Eichah in weekday clothes.

Havdalah in Speech and Over Wine

The fast begins immediately after Shabbat, making it is impossible to say havdalah over a cup of wine. Therefore, we postpone saying this form of havdalah until after the fast. Nevertheless, we say havdalah – “Ata Chonantanu” – in the Ma’ariv prayers, after which we are permitted to do work.

Since this Saturday night the fast begins, it is impossible to recite havdalah over wine. Therefore, havdalah over the cup of wine is postponed until after the end of the Tisha B’Av fast, and it is the havdalah that permits eating after the fast. And on Motzei Shabbat at the beginning of the fast, havdalah is fulfilled in speech by saying “Baruch ha’mavdil bein kodesh le’chol”, after which work is permitted (Peninei Halakha: Zemanim 9:5). According to the Ashkenazi custom, le’chatchilla, the wine is given to a minor to drink. But if there is no minor, an adult should drink the wine, and it is preferable to recite havdalah over grape juice.

Blessing over the Candle

A sick person who needs to eat on Tish’a B’Av, must say havdalah over a cup before eating. In such a case, it is proper to use chamar medinah [a distinguished beverage other than wine] (preferably something intoxicating, but any ubiquitous drink, like coffee, will do; see Peninei Halachah, Shabbat, vol. 1, 8:4). If one has no such beverage, he should say havdalah over grape juice, and if even that is unavailable, he should say havdalah – be’di’avad – on wine and drink a cheek full (around 40 ml.). If a minor, who has reached the age at which we teach him to recite blessings, is present, it is best to let him drink the wine instead of the sick person.

A minor who eats on Tish’a B’Av need not say havdalah before eating.

One of the five forbidden afflictions on Yom Kippur and Tisha B’Av is wearing a shoe or sandal. In the past, it was customary to make them from leather, because they did not know how to make good shoes and sandals from other materials, which would be strong, durable, and flexible all at once. Concerning non-leather sandals, the Rishonim disagreed as to the halakha. Some Rishonim were machmir (ruled stringently) and forbade walking in them on Tisha B’Av as long as they actually protected the foot from the difficulty of the road (Rashi, Rambam, Tosafot, Rabbeinu Yerucham). Other Rishonim permitted to wear them even when they protect the foot from the difficulty of the road (Ramban, Rosh, Rashba), and this was the practical instruction of the majority of Achronim (SA 614:2).

However, it seems clear that this view presumes a reality in which non-leather shoes were uncomfortable for walking, and thus it could be claimed that these were not considered proper shoes. Nowadays, however, when manufacturers commonly produce high-quality non-leather shoes, one may not wear shoes of any material on Tisha B’Av if it is a kind of shoe that people would wear year-round to walk on rocky and rough terrain.

A generation ago, when it was still uncommon to find high-quality shoes made from other materials, some poskim permitted walking in comfortable shoes as long as they were not made from leather, or synthetic leather. However, with the passage of time, excellent non-leather shoes are becoming more and more readily available, so the numbers of poskim who permit wearing such shoes on Tisha B’Av are decreasing.

Therefore, one may not wear non-leather shoes on Tisha B’Av if they are worn year-round on rocky or rough terrain, regardless of what material they are made from. However, one may wear cloth slippers or basic rubber shoes since they are not normally worn on rough terrain, and consequently, one feels the difficulty of the ground in them. Nevertheless, since some poskim are still permissive and permit non-leather shoes, one should not object if someone else relies on them.

The Importance of Torah Study on Shabbat and Holiday 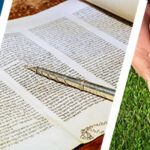 Laws of the Festivals

The Idea of the Holidays There are six holidays (Yamim Tovim) mentioned in the Torah: a) the first day of Pesaḥ; b) the

The Purification of Yom Kippur

The atonement promised to Israel on Yom Kippur expresses the special connection between God and Israel, a connection that does not depend

Blowing of the Shofar on Rosh Ha-shana

The commandments that deal with the seemingly superficial side of man, express a deeper foundation of unconditional commitment to the covenant with

Establishing the Foundations of Faith

Establishing faith passes through three foundations: revelation through Am Yisrael, observing creation, and putting talents into practice * Studying the history of